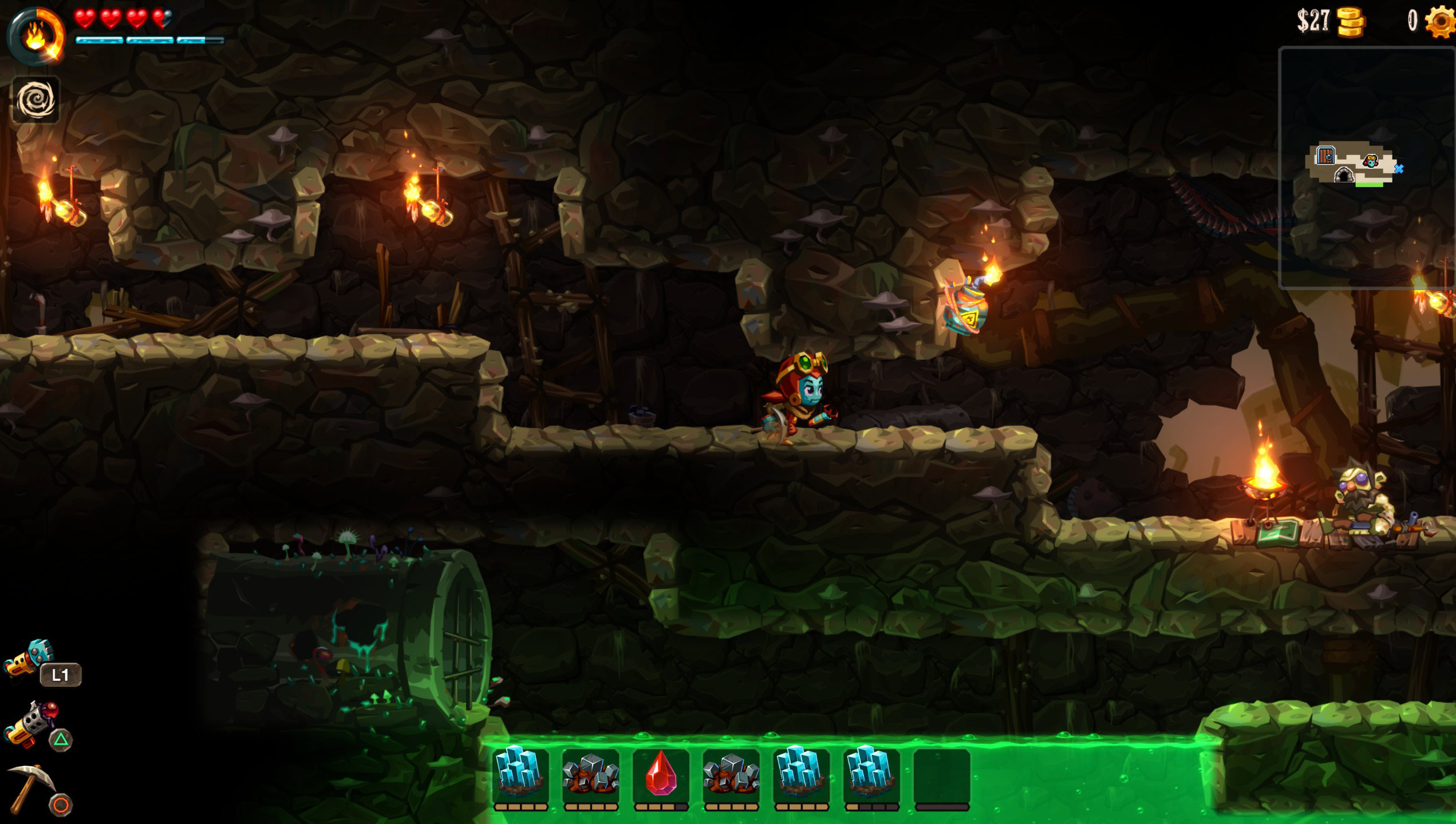 Set a short time after the cult classic first game, SteamWorld Dig 2 is the compelling tale of steambot Dorothy McCrank as she seeks her friend and previous protagonist Rusty, who has mysteriously gone missing since his heroic actions in the previous title.

Welcome to the bustling little town of El Machino — the last place Rusty had been seen before disappearing. From your first steps into El Machino and starting to dig in the mines underneath, you can tell that Dig 2 has a very different feel than the first game, and this is a great thing.

Not just a new lick of paint

From the outset it’s clear that developers Image & Form have truly taken on board any criticism the debut game had; where SteamWorld Dig‘s procedurally generated mining areas sometimes had the feel of being disjointed with no idea of where to go, Dig 2 has been handcrafted for a far superior experience. Combined with an optional marker system to highlight your next major goal at any point, there’s never a reason to get stuck or frustrated digging blindly; the gameplay is instead much smoother and focused, with definite goals in mind at any one time and a map that’s both easy and fun to navigate.

Most of your time will be spent digging away fathoms below the town, deftly swinging your trusty pickaxe through soil and the heads of the occasional nasty denizen in order to stuff your backpack full of precious ore to sell off for cash. Cash means better equipment, and you’ll need as much as possible in order to dig faster, stay below ground with light for longer, and generally improve your odds of survival as you venture ever deeper into the depths. 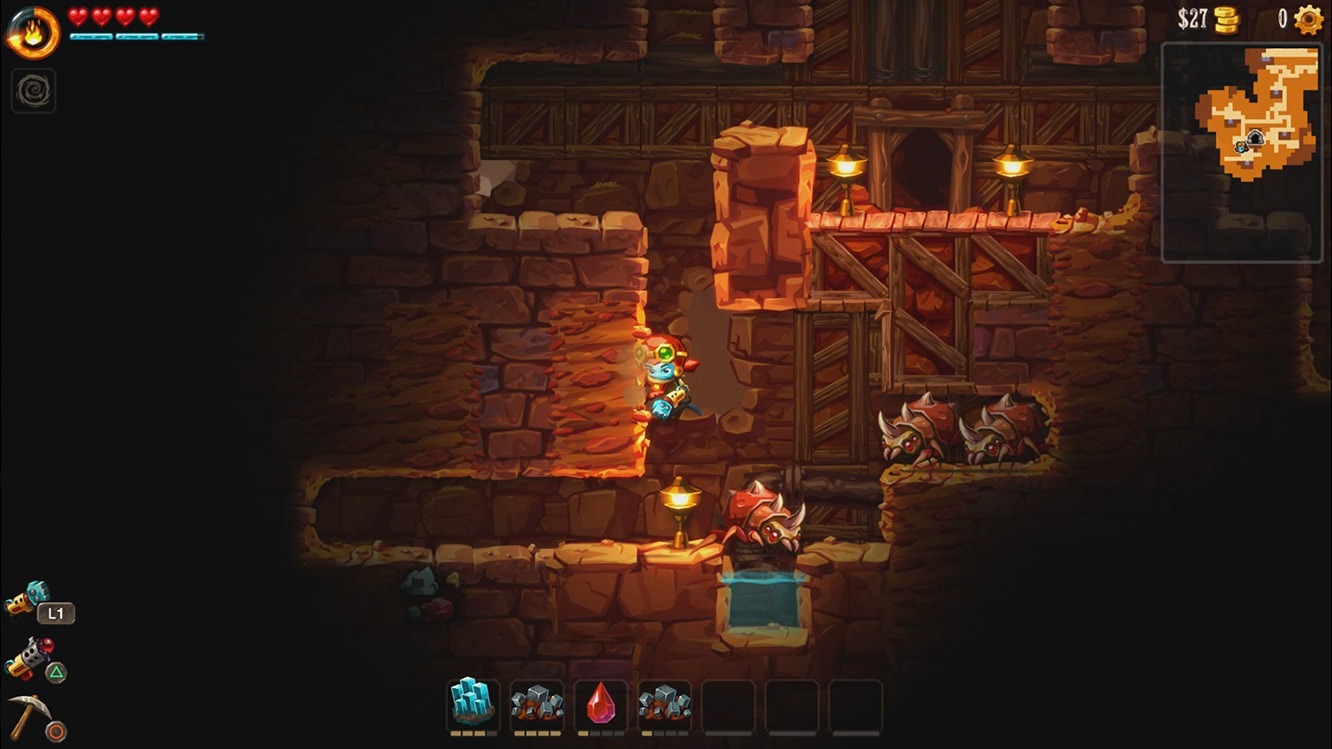 You’ll need to head back to town often to replenish oil for your light, sell off valuable ore and gems, and upgrade your equipment, so it’s nice that the new town is also much improved over the original’s small dusty town of Tumbleton. Where Tumbleton was flat and mostly devoid of life, El Machino feels like a bustling town, with plenty of characters to talk to and lots of verticality, placing additional characters of interest just enough out of reach to pique your curiosity about how to reach them.

Going back and forth from town to mining feels much more fluid and dynamic in Dig 2. Thanks to easy-to-find quick travel points and a vastly improved progression flow, something that was once a chore now becomes a trivial two-minute detour, often with an opportunity to upgrade a piece of equipment for improved quality of life. Heading back to town never really feels like a drag and instead becomes more of a simple cycle in your routine of constant progression.

Upgrading comes in two forms: firstly, you can spend hard-earned cash in directly upgrading equipment, such as bolstering bag space or making your light last longer. Secondary upgrades instead add extra functionality to each piece of equipment, and require cogs — something you’ll start finding as you explore deep underground and stumble upon various secret areas. Cogs unlock fantastic enhancements such as improving your ability to evade hazards or being able to directly teleport back to town, something that becomes a godsend once your bags are full and realise you’re a long way from home. 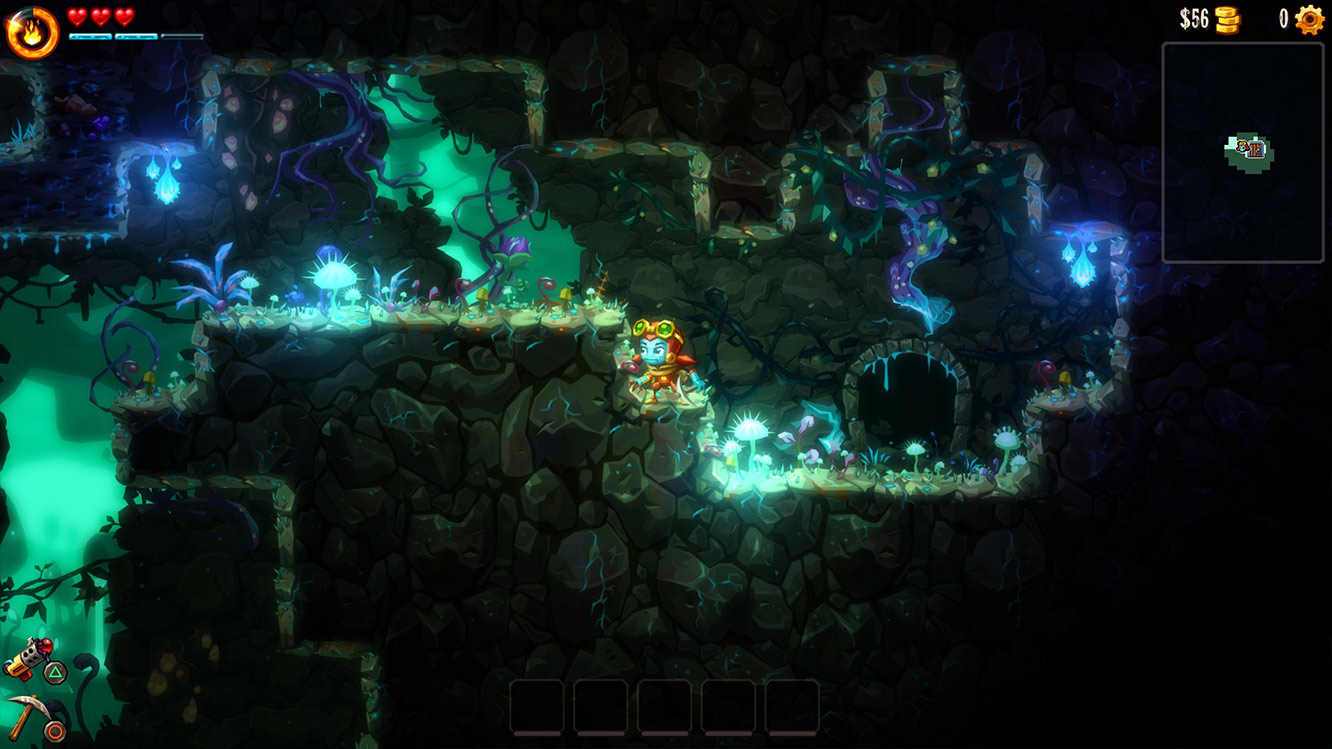 Digging isn’t only about gaining riches, of course — you’ll stumble upon plenty of other places of interest and can bump into a number of quirky characters. You’ll be able to find special mining stations that grant new equipment to Dorothy, giving access to areas previously gated behind unbreakable walls or vast chasms, and the rate at which you gain new abilities has been finely tuned to keep you interested and engaged at all times.

For challenge lovers, there are plenty of special caves in Dig 2 — much more than the first — where you’ll need to figure out how to correctly progress in order to snag some sweet loot. While they start easy, they soon demand a lot of quickthinking and deft maneuverability to surpass; thankfully, failing or even dying just resets the cave each time, making it easy to reattempt.

Indeed, death itself has little punishment in Dig 2. Where other titles such as Hollow Knight will drop your haul where you died and weaken you until you retrieve it, here you’ll respawn back in town with the only cost being the loss of some supplies, something that can be further reduced with some smart upgrades. It may not sound like much, but it helps reduce any stress or fear that digging deeply and exploring off the beaten path may screw you over; instead, you’re openly encouraged to explore and see just what lies out there, beyond where other steambots tread. 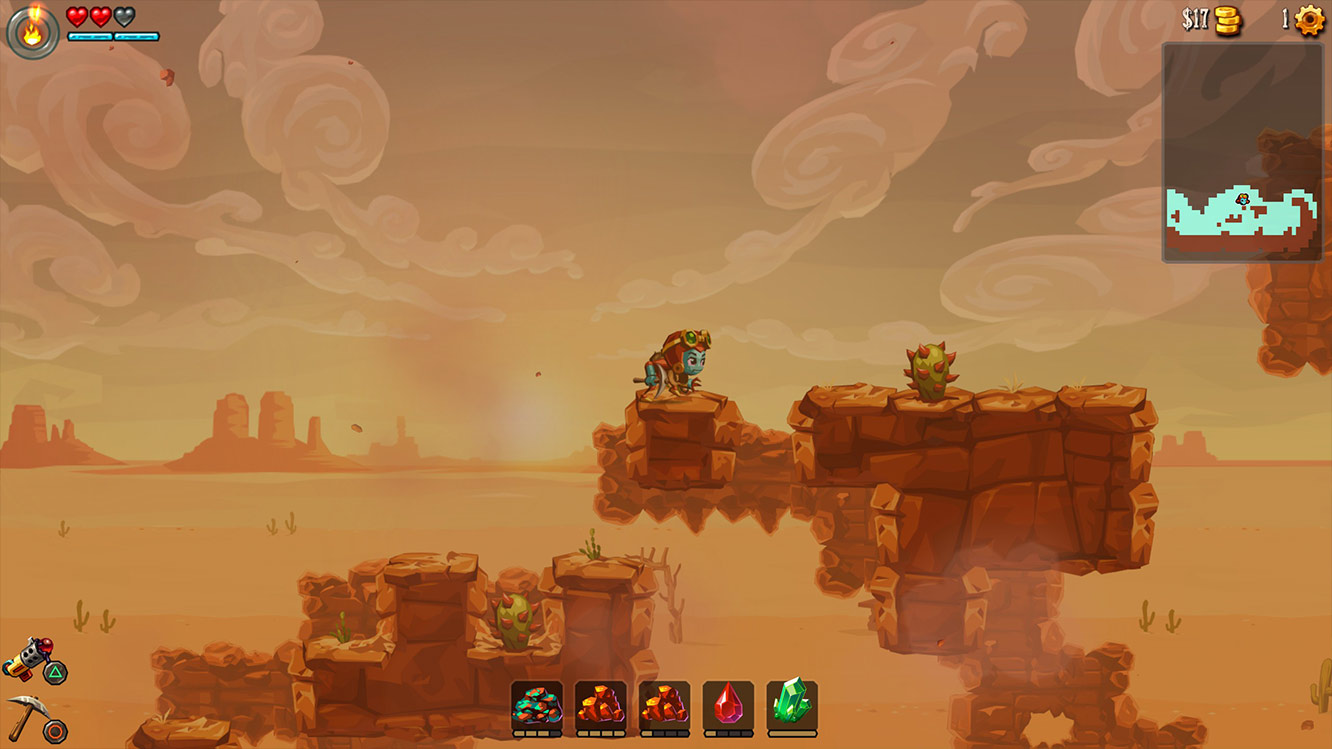 SteamWorld Dig 2 is an improvement on the first title in every single way. Migrating from procedural generation to handcrafted zone layouts has paid off immensely, with each area being fun to explore and progression becoming quick, easy and hugely enjoyable. It’s surprisingly difficult to criticise the game, a sign that we’ve got a clear winner on our hands here. 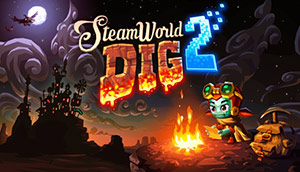